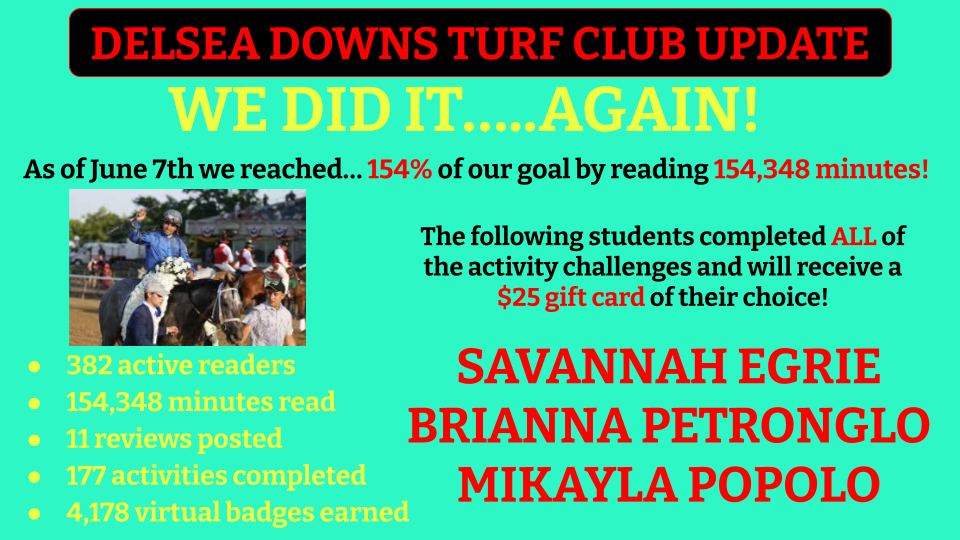 We're at the home stretch as we complete our LAST marking period
​of the school year!

(To view linked articles from Encyclopaedia Britannica, click on "Continue to site" to bypass logging in.)
Triple Crown, in American horse racing, championship attributed to a three-year-old Thoroughbred that in a single season wins the Kentucky Derby, the Preakness Stakes, and the Belmont Stakes. It had long been considered one of the most coveted and celebrated achievements in all of sports, but with the sharp decline of horse racing’s popularity by the beginning of the 21st century, the Triple Crown became less prestigious in the eyes of the general sporting public. However, it is still an elusive achievement: since 1875, the first year in which all three races were in existence simultaneously, only 13 horses have accomplished the feat.

Efforts to cluster races along the lines of the British Triple Crown began after the American Civil War. In 1875 Meriwether Lewis Clark, Jr.—the founder of Churchill Downs, home of the Kentucky Derby—tried to promote a Triple Crown centred around his Derby. At the turn of the 20th century, race organizers in New York focused on three contests that took place in that state. These efforts failed owing to provincialism among the racing entities, with each one insisting that its own events were preeminent. In fact, it was a long time before the socialites of the Eastern states, who largely controlled the sport, would even allow their horses to run in the “West” at Churchill Downs. It was this stubborn attitude, along with a belief that the Derby was raced too early in the year—before young three-year-old horses had fully matured—that impelled owner Samuel Riddle to keep the great Man o’ War out of the Kentucky Derby in 1920, thereby denying him a probable Triple Crown.
The concept of an American Triple Crown was popularized in great part through the writings of Charles Hatton, a columnist for the Daily Racing Form. He frequently used the term triple crown in reference to the three races in the 1930s, and as the term caught on, more and more owners and trainers began to prepare specifically for these contests. By the 1940s, newspapers were routinely using the term. The Triple Crown title was formally proclaimed in December 1950 at the annual awards dinner of the Thoroughbred Racing Associations in New York and retroactively awarded to Sir Barton, the first horse to win all three races (1919). The title was then given to subsequent pre-1950 winners at following annual dinners of the organization.

During the 18 years between Gallant Fox’s capturing the Triple Crown in 1930 and Citation’s win in 1948, there was an average of one Triple Crown winner every two and a half years. However, there followed a 25-year wait until Secretariat captured the honour in 1973. Consecutive Triple Crown victories by Seattle Slew in 1977 and Affirmed in 1978 excited racing fans, but another long dry spell set in afterward until American Pharoah won the Triple Crown in 2015. The wait for the next winner was short, as Justify accomplished the feat three years later.